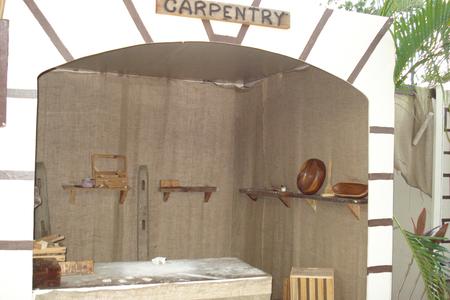 Visitors to towns like Nazareth or Bethlehem have found these workmen to be quite primitive. About the only modern innovation they have adopted has been to have a workbench instead of sitting on the floor beside their working board, as some men, engaged in related crafts, actually do even in modern times. Instead of working, however, always at this bench, they are seen to do much of their work at the doorsill where the light is much better.

The Carpentry Shop is set-up to look much like a workshop.  Travelers would be in need of a new harness for their carts, or wood for a new plow.  The visitors can be told that they will need to be patient, as the carpenters are very busy with orders for the Romans. The Romans need wheels for their chariots, and they do not take no for an answer.

The carpenter stretcheth out his rule; he marketh it out with a line; he fitteth it with planes, and he marketh it out with the compass" (Isaiah 44:13). The "rule" was no doubt a measuring line; the "line" was a marking tool or stylus, taking the place of our pencil; the "plane" was a scraping tool; and the "compass" was an instrument for making a circle, as it is today. The "ax" was used in olden times to shape timber as well as to fell trees. It had an iron head usually fastened by means of thongs to a wooden handle, and so it was easy for the head to slip off. Deuteronomy 19:5 and II Kings 6:5). Excavations at the city of Gezer revealed that the people of Israel in Bible times had developed ribbon-flint knives into saws by making their edges irregular. Finds there also indicate that they used saws that were made of thin, flexible strips of metal that had been set in frames of wood. Isaiah mentions the use of the saw: "Shall the saw magnify itself against him that shaketh it?" (Isaiah 10:15). Jeremiah refers to the use of hammer and nails: "They fasten it with nails and with hammers that it move not" (Jeremiah 10:4). The archaeologists have found an abundance of bronze and iron nails. The hammers they have brought to light were made mostly of stone.

Frozen bread dough: From Publix 1 pkg of 3 each (Thawed)