The rise of the Roman Empire played a crucial role in the ability of Christianity to impact the world. First, when Rome conquered the peninsula of southern Italy, it was impressed with the Greek culture and adopted it for its own. This Greco-Roman culture spread throughout the entire Mediterranean world, including the Greek language. Although decrees were written in Latin, and many dialects and languages were spoken throughout the empire, Greek became the language of trade, and when the gospels were written in Greek, they were immediately understood by the entire civilized world.

Second, because of the imposed Roman pax, or peace, travel was permitted and people moved safely throughout the region. Even today it is difficult if not impossible to travel from one region to another in this area. Yet the very rule of Israel saw as oppressive created a means for the disciples to spread the good news. Cities sprang up, and over 250,000 miles of roadways were built throughout.

With this increased travel, Jews began to spread out and established communities in these cities. There were as many as 150 synagogues scattered throughout the empire, and they became lighthouses of monotheism and morality in an ever decaying ethical, polytheistic world. Many people became weary of their gods, and turned toward the concept of one Supreme Diety. Some turned to Judaism, and then eventually Christianity. Throughout the book of Acts, it shows Gentiles seeking the truth of the Gospel.

The scriptures themselves held the laws of Moses, and created a longing for a Savior who could free them from the bondage of sin. Non one was good enough. None could follow every law to the letter. Man became increasingly aware of his own sinfulness.

The stage was set. The roads were built, the language and culture universalized, the people's hearts prepared. All that was left to do was to send the angel to a young maiden, and invite her to become mother to the Savior of the world. To brin her and her betrothed to a tiny village called Bethlehem.

So often in life we assume that God does not hear us. We assume He does not care about our needs because we don't see immediate results to our prayers. Here, in hindsight we see a very active and loving God moving things into place like pieces on a chess board. We can trust our God is loving us too. He is watching over us even when we cannot see. Just look for the star and realize how much you are loved.

"For God so loved the world that He sent His only begotten Son, that whoever should believe in Him should not perish, but have eternal life" 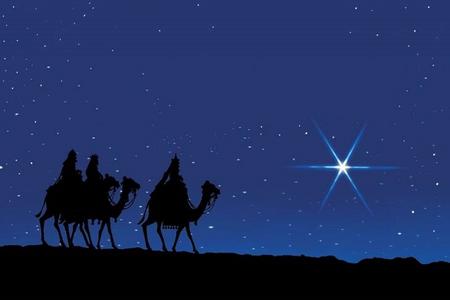 Imagine what it must have been like for the people living at the time of Christ's birth! During the 400 years between the old testament prophet Malachi and the birth of Jesus, no prophet had risen up. God seemed to be silent. Perhaps the Hebrew people wondered if He was sleeping--if He had turned His face away from His chosen people. Yet during this crucial time, God was busy getting everything in place in preparation for the coming of the Messiah, His Son Jesus!